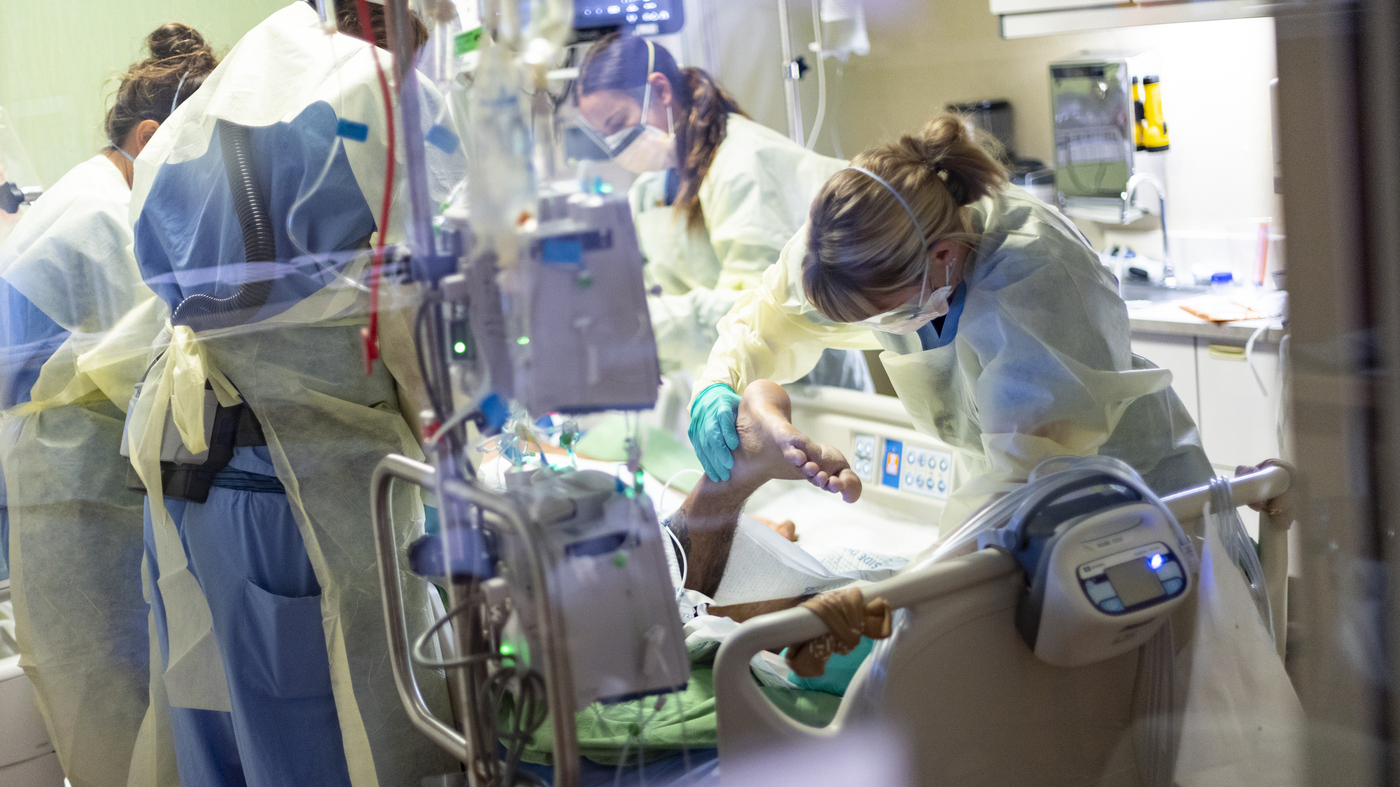 In Idaho, a record number of people are hospitalized with COVID-19, raising the possibility of rationing medical care. Many states are grappling with the fallout of the delta variant’s surge in cases.

In Idaho, a record number of people are hospitalized with COVID-19, raising the possibility of rationing medical care. Many states are grappling with the fallout of the delta variant’s surge in cases.

The U.S. health care system is again buckling under the weight of a COVID-19 surge that has filled more than 100,000 hospital beds nationwide and forced some states to consider enacting “crisis standards of care” — a last resort plan for rationing medical care during a catastrophic event.

The idea is an alarming sign of how the delta variant has ripped through large swaths of the country — primarily sickening the unvaccinated and straining an already depleted health care workforce.

In recent weeks, more than 10 states have reached their highest hospital admissions for COVID-19 of the pandemic, from the Southeast to the Pacific Northwest. And the U.S. continues to average more than 160,000 new coronavirus cases a day.

Many hospitals are “right on the edge”

“We’re in a very dangerous place, given the level of our surge,” says Dr. Bruce Siegel, president of America’s Essential Hospitals, a trade group that represents hundreds of public hospitals.

“We are right on the edge of entering crisis standards of care. I hope we don’t get to that point, but it could very easily happen,” Siegel says. This is essentially a road map for how to divvy up medical care in a way that’s equitable when resources are tight.

While there are national guidelines for crisis standards, the actual plans can vary depending on the state, region or institution. Declaring crisis standards does not necessarily mean patients will be denied care altogether, but it does give hospitals flexibility about whom to prioritize and provides legal protection for doctors.

For example, certain patients deemed less likely to survive may not get a bed in the intensive care unit. Nurses may be asked to treat many more patients than is normally considered safe. Patients may have to be discharged from the hospital before they would normally go home, and some patients who would usually be admitted for hospital care might have to be denied.

Arizona had to activate its plan earlier in the pandemic. And some states came to the brink of doing so last winter. These plans can include a “scoring” system that evaluates a patient’s chance of survival based on the functioning of the brain, heart, kidneys or other major organs.

And even if states narrowly avoid this worst-case scenario, doctors in hard-hit regions say the sheer stress on hospitals is inevitably affecting patient care in ways that are painfully reminiscent of last winter, when the U.S. peaked at more than 120,000 hospitalizations

“It’s worse than ever”

Nurses overwhelmed. ICU patients being housed in the emergency room. Doctors scouring the state for the last bed. These are scenes that critical care doctor Kenneth Krell never expected to deal with in late 2021, once highly effective vaccines for COVID-19 were widely available.

“It’s worse than ever, with — at this point — seemingly no end in sight,” says Krell, who helps run an ICU in eastern Idaho. “So by no means are we delivering a usual and customary standard of care.”

In Idaho, the Republican Gov. Brad Little has called in the National Guard and federal health care workers to help short-staffed hospitals with logistics and staffing in an effort to avoid activating crisis standards of care.

If the crisis standards are enacted, doctors will start making decisions about “who gets the most immediate care by their probability of survival,” with the goal of “saving the most lives,” says Krell. This would apply to COVID-19 and non-COVID-19 patients alike, he says.

“There’s a huge downside,” Krell says. “We’re going to create panic in the state, in that people will decide they can’t get care.”

As was the case earlier in the pandemic, it’s trained health care workers — not ventilators or physical space — that are the key limited resource. In fact, many hospitals have even fewer nurses, respiratory therapists and doctors now than they had on staff during last winter’s surge.

“The staffing crisis is the worst it has been,” says Siegel of America’s Essential Hospitals. Health care systems have hundreds of vacancies that can’t be filled, even if they pay top wages because “people just aren’t there anymore.”

On top of that, for many hospitals, there was no letup after last winter’s COVID-19 surge; they stayed busy, he says, because there were so many patients coming in for delayed care.

In Alabama, Republican Gov. Kay Ivey declared a state of emergency last month because of the surge in serious COVID-19 cases. “It has really impacted and fragmented all of health care right now,” says Dr. Aruna Arora, president of the Medical Association of the State of Alabama.

“Everyone is short nurses,” Arora says. “EMS response times are a lot slower. Patients are having to wait in the ER for a long period of time.”

“Gut-wrenching decisions” on the horizon

Even if a hospital never has to activate its crisis care protocol, it is crucial to be ready with such a plan, says Dr. Eric Toner, a senior scholar at the Johns Hopkins Center for Health Security who has helped design guidance on crisis standards for states and health care systems.

“In the absence of a declaration or a plan, doctors and nurses, on their own, are the only ones left to make these gut-wrenching decisions,” Toner says

It’s worse than ever, with — at this point — seemingly no end in sight

Everything should be done to avoid moving to crisis standards, says Toner, but he worries that many places right now are in “chaos,” struggling to do the kind of coordination necessary to keep this worst-case scenario at bay,

“We have individual doctors calling other hospitals, even out of state, trying to transfer patients — that should not be happening,” he says. “We’re not balancing patients enough between hospitals. We’re not sharing resources as well as we should.”

In New Mexico, the surge has led to ICU waiting lists and state health officials have warned they might have to employ crisis standards of care soon if the trajectory of infections simply stays the same, let alone rises.

But at least some hospitals in the state do feel better equipped to handle the surge than they did last winter.

Dr. Jason Mitchell, the chief medical officer for New Mexico’s largest health care system, Presbyterian, says he’s “optimistic” hospitals will not have to implement their crisis plans because they’ve gained a lot of experience managing the pressures of COVID-19 in the last year.

We were all saying, including most hospitals, ‘Let’s be ready for winter because of flu and COVID.’ Well, it hit us before that.

“We’ve been able to work through this phase of the pandemic and still maintain that standard of care,” he says. “That means people work harder, they work longer.”

Other states may be catching a break, too. According to the latest modeling from the Institute for Health Metrics and Evaluation at the University of Washington, some of the hardest-hit states may have reached their peaks in hospitalizations and cases, especially in parts of the South like Florida and Texas.

But in many other parts of the country, hospitalizations are likely to keep increasing, the researchers say, with the U.S. projected to hit a peak of about 116,000 people in the hospital by mid-September.

According to the model, ICU capacity will be under “extreme stress” in states like Tennessee, Kentucky, Indiana, Hawaii, Georgia, Delaware and Wisconsin.

Ali Mokdad, part of the University of Washington team, says it’s understandable that some hospitals in the U.S. are particularly struggling right now. Many Americans are still unvaccinated, and the delta variant has changed the dynamic in the U.S.

“Nobody expected a surge in summer. We expected the surge in winter,” says Mokdad. “And we were all saying, including most hospitals, ‘Let’s be ready for winter because of flu and COVID.’ Well, it hit us before that.”